It's a good time to be a beer lover. There are now more than 5,000 breweries in the United States alone—that's twice as many as there were just four years ago.

Beer lovers are consuming more high-end beer. They're willing to pay for brand, location, and taste. They're expecting an experience. This puts the onus on beer sellers to curate interesting and diverse tap lists. That process is both art and science—equal parts taste and data. 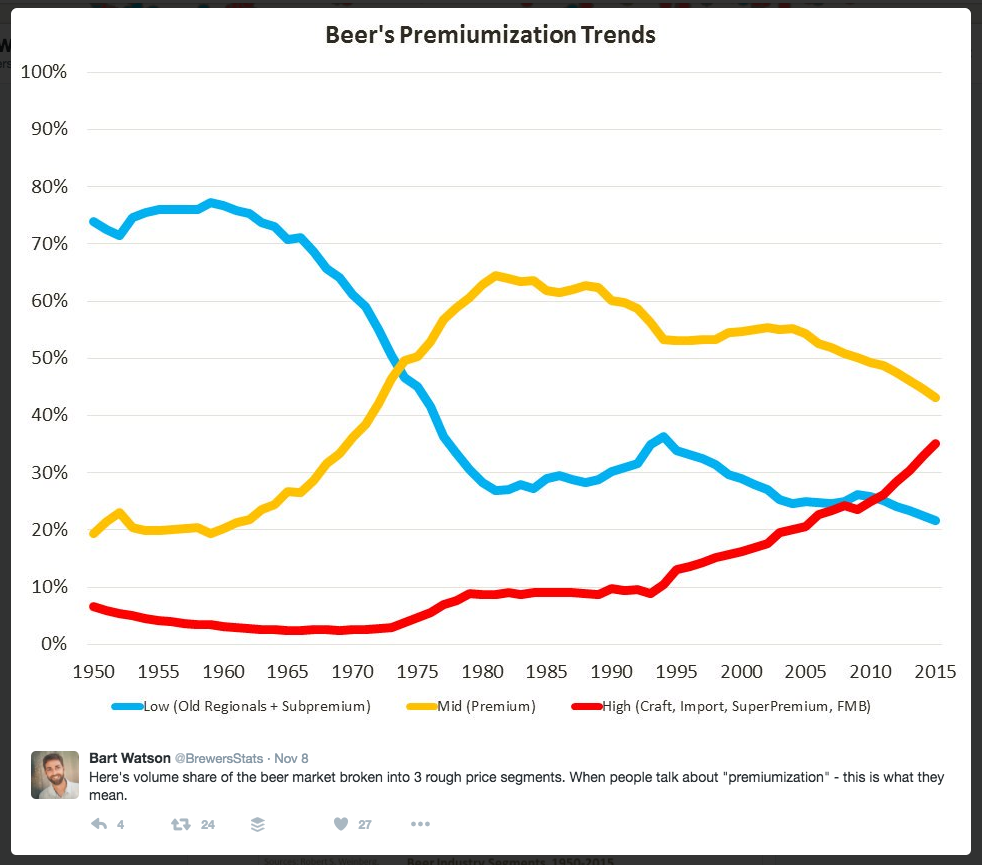 According to BeerMenus co-founder and resident Level 2 Cicerone Will Stephens, a tap list curator has two primary responsibilities:

The tap list affects how often people come, how long they stay, and how much they enjoy spending time at your bar or restaurant as opposed to others nearby.

Above all else, have integrity over your list. Cutting deals with distributors to guarantee the big brewers tap lines is a disservice to your customers. Keeping the same old beers on tap out of habit will bore people. More than anything else, your job is to maximize happiness—people love beer and you have the chance to make their experience a great one.

Regardless of which beers you choose to sell, we've provided below a basic template to help you make sure you've got something for everyone.

Within each of these categories, there are hundreds of great beer options and plenty of ways to make sure you're serving up the brews people want. This template is meant to be flexible—we get into some of the factors that affect your specific beer choices below. 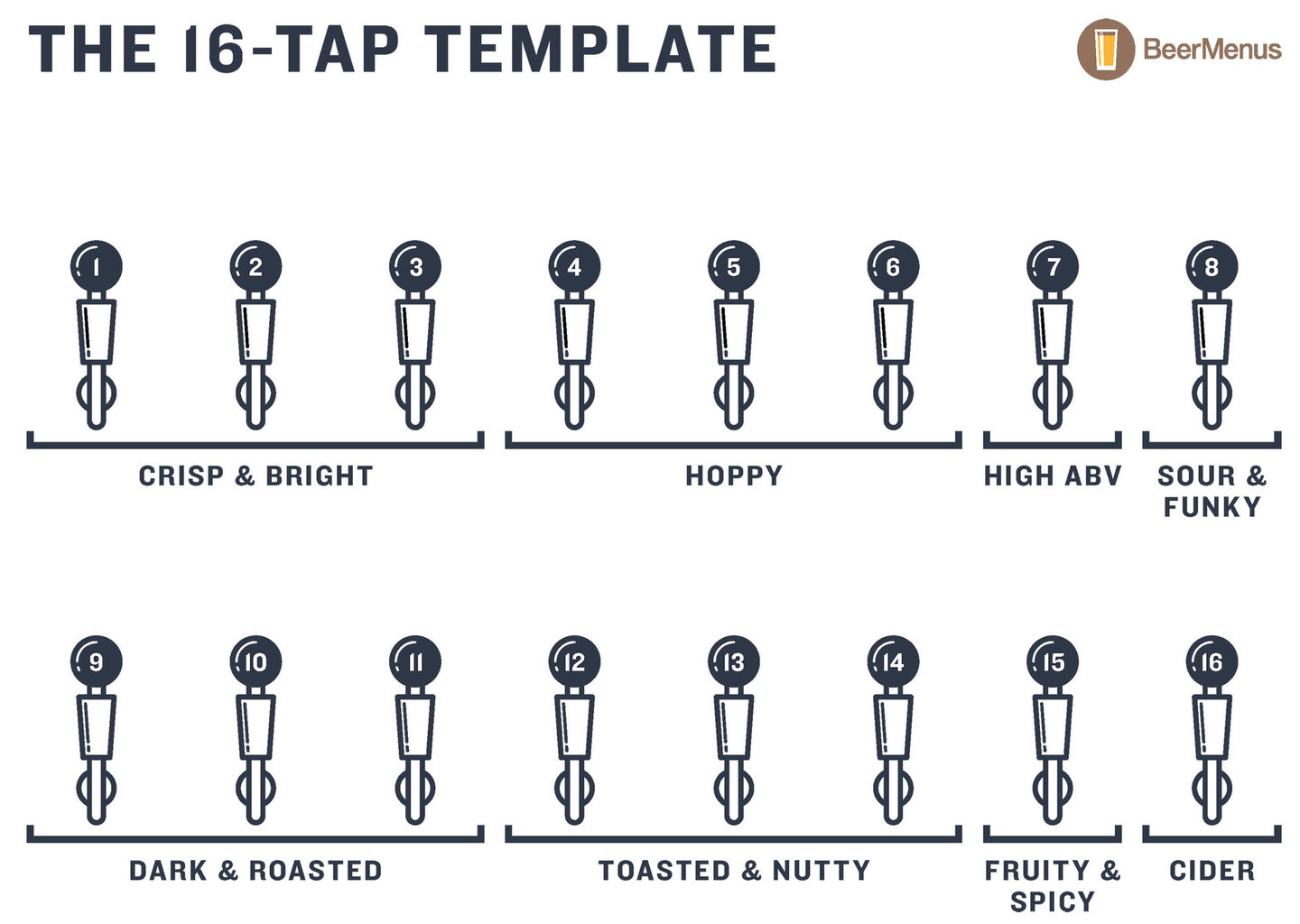 This template is designed to create lots of choices, not constrain your list. A little direction can go a long way.

It's easy for the beer lovers behind the bar to forget that limited release bourbon barrel-aged imperial stouts aren't for everyone. Even if your ideal customer is a sophisticated drinker, a diverse list is good for business. People like to drink and eat with their friends—serving beers that are accessible and interesting to a wide variety of people will keep your bar or restaurant busier than a narrow list of high end (or low end) beers.

The template above is only useful if it's customized for your customers, your location, the food you serve and the change of seasons. Here are a few factors to consider when building out your beer list.

The word “flavor” is the tip of a very deep iceberg. As Will often reminds us, “Beer is one of the most varied beverage categories. You can make beer with just about anything.”

Perhaps some brewers have taken this too literally—the folks at Mikkeller made an oatmeal stout with rare Kopi Luwak coffee (which is produced only after being consumed and passed by the Civet)—but that's what's so great about this industry. Brewers are an adventurous bunch.

There are near-infinite factors that affect the way humans interpret the way something tastes. But to keep it simple, you need to know that there are five independent flavors that humans taste:

Simple enough, but beer has one other factor to take into consideration (besides experience, which can influence how much or little a person likes a beer). Cicerone Certification Program founder Ray Daniels says that flavor = taste + aroma. The way something smells is inextricably linked to way it tastes in our mouths.

Every combination of flavor profiles and aromas come together to make these flavors in different proportions. In practice, you need beers that appeal to each of these different flavor profiles, though you'll rarely communicate about food or beer with words like “umami.” The template above translates this language into layman's terms.

Beer drinkers exist on a spectrum ranging from casual drinkers to craft enthusiasts. A balanced tap list should reflect that. If 14 of your 16 taps are local, exclusive beers, you'll appeal to just one end of that spectrum. If eight of your 16 taps are light, mass produced lagers, you'll only appeal to the other end. Striking a balance is key for nearly every bar or restaurant, even those that cater to one end of the spectrum.

And here's why: a great experience with the first beer is more likely to result in a second beer. Consider a tap room that caters primarily to folks who enjoy premium, high-end IPAs. You might need a Blue Moon or a common cider on your list so that if they bring a non-beer-loving friend, that person can have a great experience too. Casual drinkers are less likely to be adventurous with their beer selection, so familiar brands and lighter tastes can serve as “gateway” beers.

The folks from the Beverage Executive Symposium (PDF) help us to visualize the customer perspective: 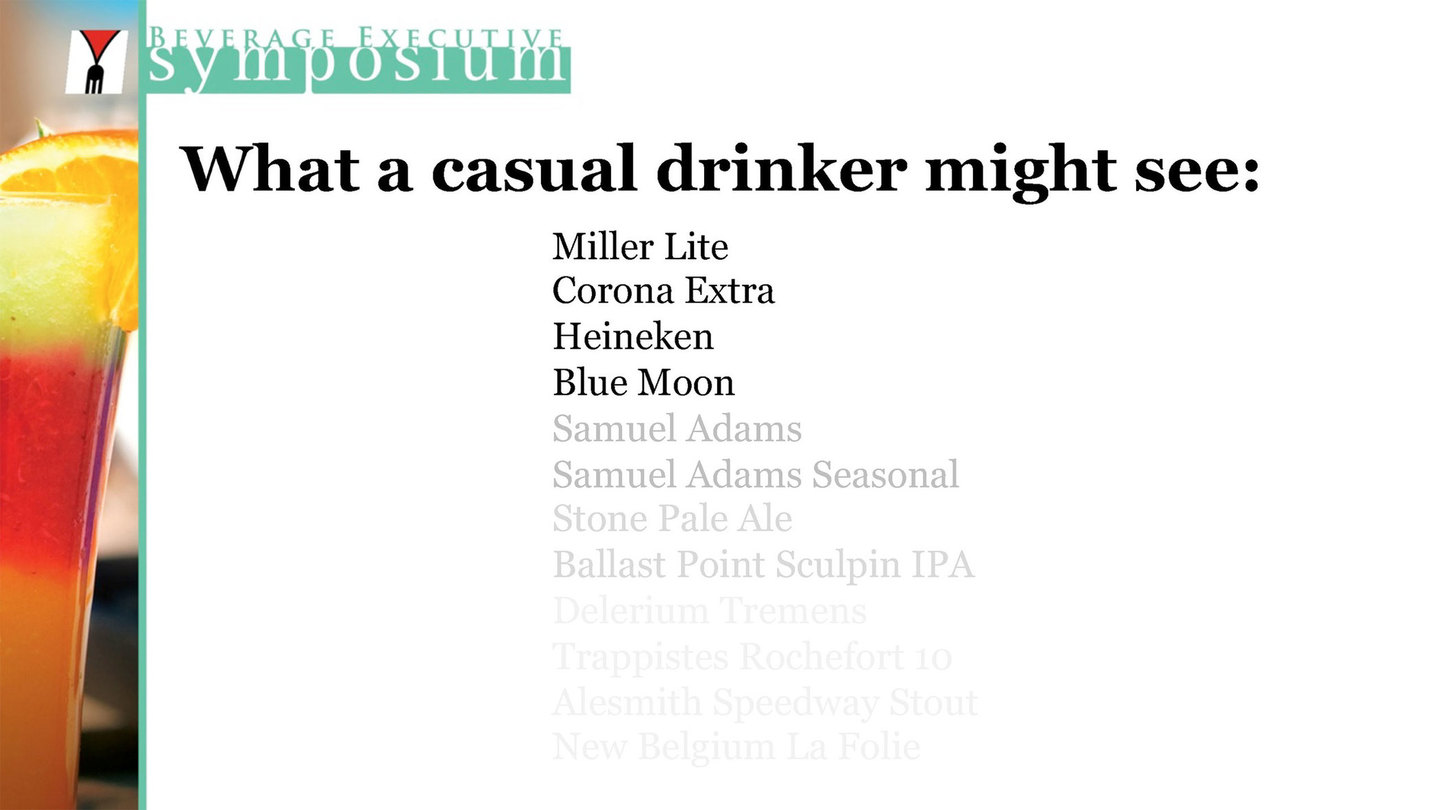 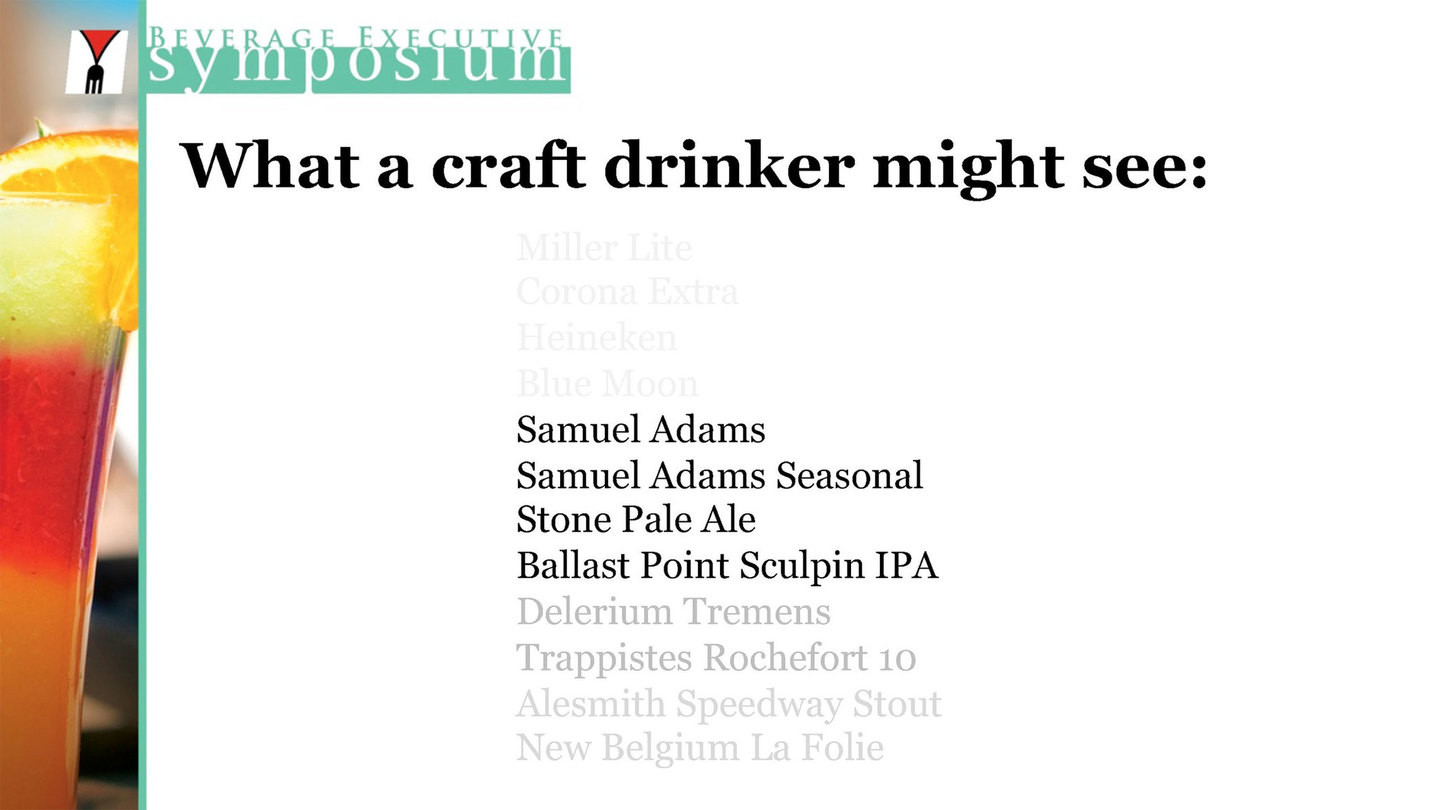 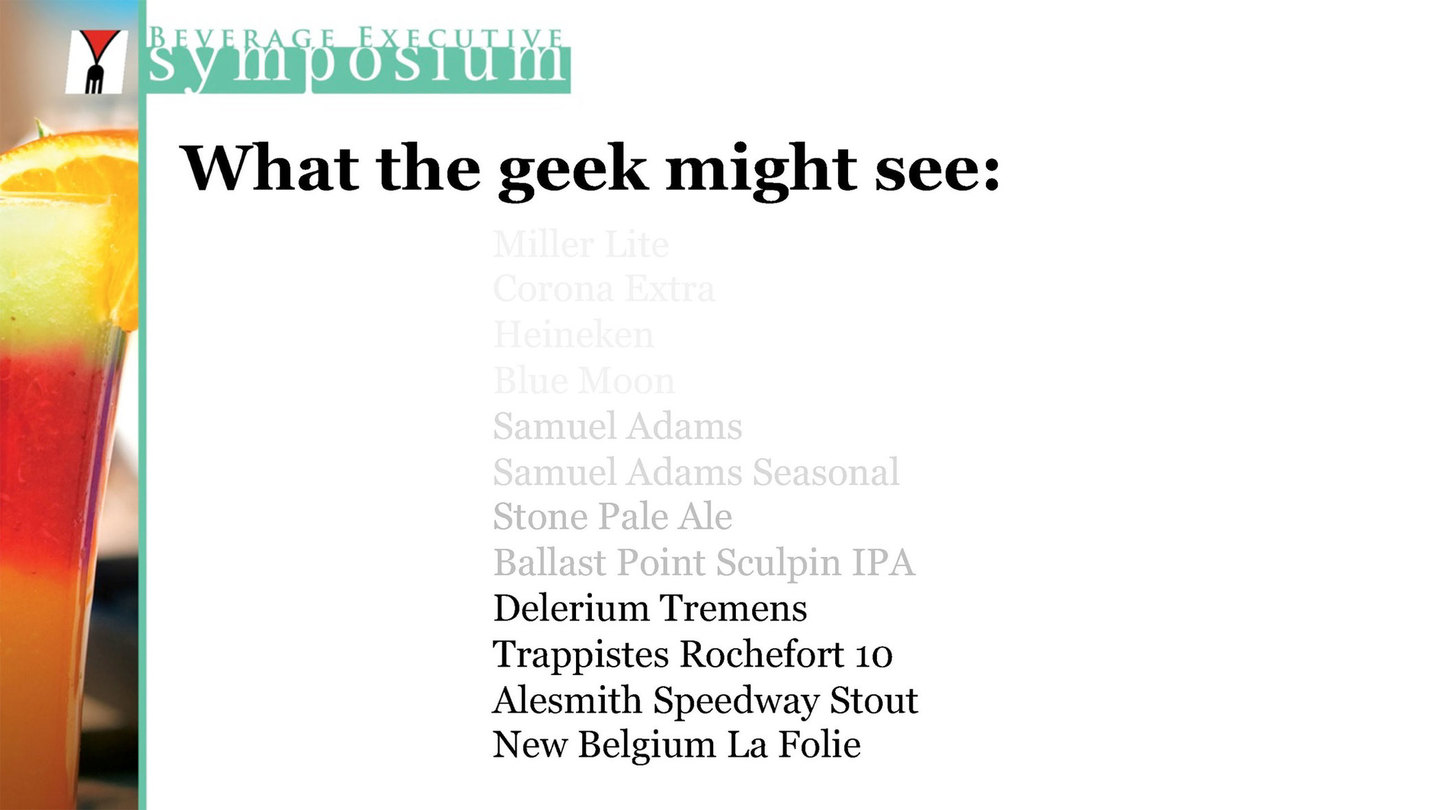 Assume that your list should at least touch on styles that appeal to a wide range of people. Stuart Melia, Vice President of Beverage at Rock Bottom, keeps some of each of the following styles on his tap lists at all times (source):

Selling beer to people who love beer is easy. But you'll also want to account for “cross drinkers,” people that also enjoy wine and cocktails. This group might enjoy a sour beer, a cider, a spirit-barrel-aged beer, or, of course, a hard soda.

The style of food you serve obviously affects the beers you'll keep on tap. Food and beer go well together, but there are a few simple rules that can make pairing them easier. There are two basic approaches to pairing food and beer.

As you get more sophisticated, you can “cut” certain flavors with carbonation and ABV, or even create brand new flavors. The Brewers Association maintains a detailed list of beer and food pairing suggestions, but here are a few simple guidelines: 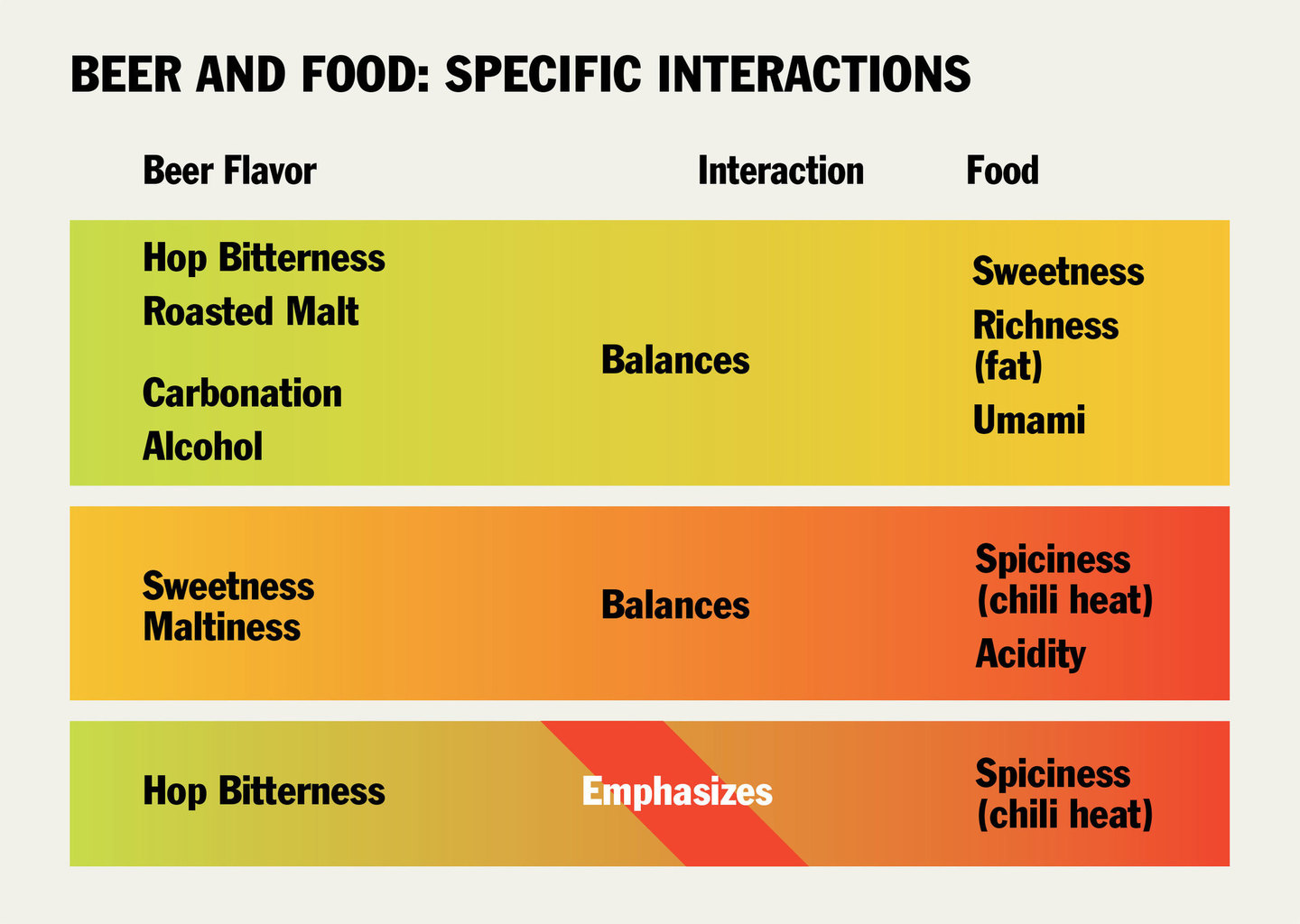 If your customers are sitting down to eat, it's likely they'll have more than one drink. Their choices will reflect the trajectory of their evening. They may, for example, start off with a new beer they've never tried, then transition into a lighter beer while they eat before finishing the night with a high ABV nightcap. A great beer list not only appeals to a wide spectrum of people and pairs nicely with food, it takes into account the different jobs the beer is being hired to do.

Specialty joints like seafood and BBQ restaurants will need to customize their tap list for food pairings more than a burger bar does. Same goes for Irish pubs, who might lean heavily on Guinness and Smithwicks, or German beer halls who could swap out an Amber for a second Hefeweizen.

The seasons will affect your food and beer menu, too. Winter in Chicago calls for a strong stout paired with sliders. Summer in Austin, a double IPA with brisket. There are few binding rules when it comes to beer and food pairings. It's always a good idea to test new pairings and get feedback from customers.

Here's a checklist you can use alongside the template to make decisions about a balanced tap list:

And lastly, here are a few other ways to inform your list:

You don't need to be a Master Cicerone to put together a great tap list, but you do need to understand how to keep the hopheads excited while appealing to folks who typically opt for wine or a cocktail. There are beer flavors out there for everyone, it's just a matter of sourcing a diverse menu for anyone who might walk into your bar.