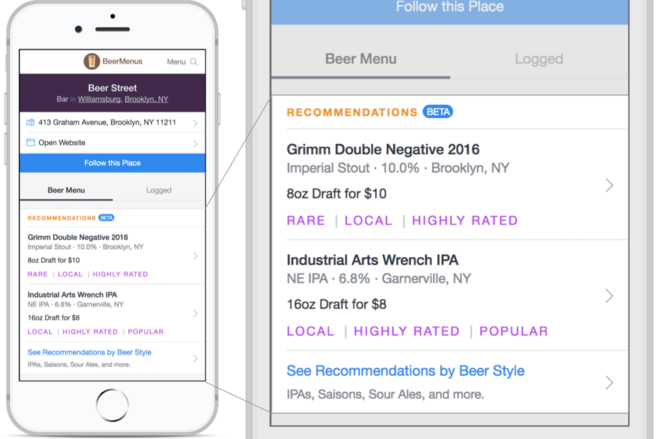 We're proud to announce a brand new BeerMenus feature, made just for you, the beer lover: Beer Recommendations!

Now each menu on BeerMenus mobile web, iPhone app, and Android app will lead off with an all new "Recommendations" section!

We're still working out a few kinks (hence the BETA tag) but we were just too damn excited to wait any longer. We needed to let Recommendations loose on the world ASAP!

We'll get into the algorithm-y weeds below (grab some popcorn!) but here's the bare bones story on how Recommendations work: Beers land in the "Recommendations" section based on how well they score in 5 categories:

As you can see, we also included Recommendations by Beer Style in this launch. We love this tool. It comes in handy if, for example, you want a hoppy beer but you don't know where to start because a place has a ton of IPAs, double IPAs, etc. Simply navigate to "Recommended Hoppy Beers" and order!

As always, if you have any questions/concerns/feedback let us know.

Once you give Recommendations a shot, show us some love by Tweeting about them or sharing this blog post on Facebook !

As a beer drinker, when, how, and why should I use Recommendations?

1. Recommendations will help you decide which beer to order/buy.

If the place you're at uses BeerMenus, flip open the BeerMenus app or BeerMenus.com and pull up their menu on BeerMenus. Recommended beers are right there at the top, meaning you'll no longer have to mull over the paper menu (or lack of a menu, if you're at a beer/liquor store). You'll no longer be paralyzed by choice!

2. Recommendations will help you decide where to go.

Recommendations bring a place's best beers to the top of its menu. This means that when you're deciding where to go and looking at different places' menus, you don't have to scroll through their whole list to see the best they've got to offer—now that'll be right at the top of the menu!

Recommendations allowed us to overhaul our "Top Places Nearby" list. Previously, this list was simply a ranking of nearby places with the most followers.

Number of followers is a decent stand in for great beer (they had to get those followers somehow!), but it doesn't tell you where to go to get the best beer right now.

Now it does—we renamed the list Where to Go Right Now, and it uses the Recommendation "engine" to figure out the nearby places with the best beer selections right now.

Since places are always changing their beers, this list will always be changing as well (are you getting how pumped we are about the right now part of this?!) which means you'll more easily discover new places all the time! 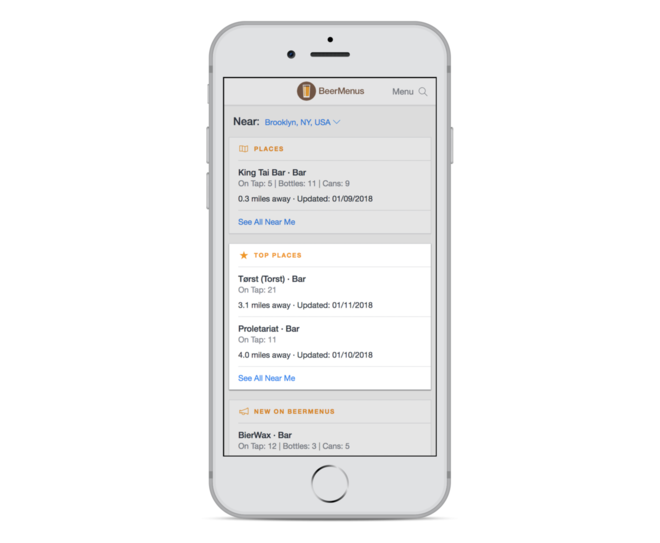 Where to Go Right Now (New) 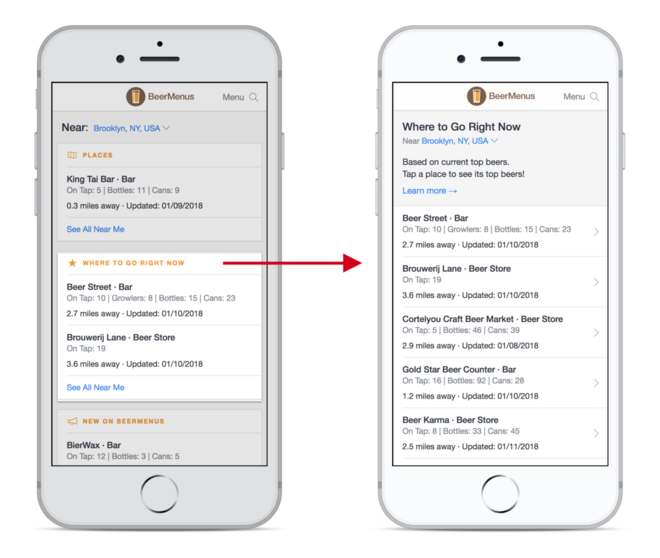 How are beers Recommended? What data do you use?

First, let's be clear about what Recommendations aren't: they're not flat star ratings or 100-scale ratings. While helpful, ratings don't tell the whole story.

We do include consumer ratings in the data, but we also add in data from the 35,000+ places who list their beers on BeerMenus and the activity of millions of beer lovers who use BeerMenus to find beer. Importantly, geographical nuance figures in as well.

This means that a Bell's Two Hearted isn't just a plain and simple "92" or "4 stars." It gets a different score at a place in Columbus, OH than at a place in New York City than one in Minneapolis than...you get the picture.

As far as nuts and bolts go, to score and rank beers we use an index called the Beer Score.

To calculate the Beer Score, we use internal data to answer 5 questions about all the beers on every place's menu:

Once we've answered all five of these questions for each beer on every menu, we calculate a score for each beer. On each menu, the highest-scoring beers appear in Recommendations.

As you can see, we also indicate the principal reasons why each of the recommended beers made the cut. We include this because when we're out in the wild we want to know why a beer was recommended, and figured you'd like to know, too!

This is completely dynamic!

Because the Recommendation "engine" is always running, it's possible for places' recommended beers to change minute-to-minute, hour-to-hour, or day-to-day!

Something look off? Skeptical? Want an earful from our lead developer, Joe? Shoot an email to support@beermenus.com—as always, we're happy to help!