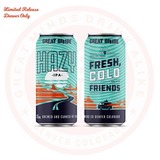 Add your business, list your beers, bring in your locals.

2 places have this beer near you

These places list their beers on BeerMenus. Join them for free — Add my business

Follow this beer to get emailed when local businesses get it.

A juicy and balanced mix of citrus hops that bring out the aromatic characteristics of papaya and mango and finishes with a hint of ripe strawberries.

HAZY IPA is a juicy and balanced mix of citrus hops that bring out the aromatic characteristics of papaya and mango and finishes with a hint of ripe strawberries. At almost 6 pounds of hops per barrel, Hazy IPA is a hop bomb that delivers the bitterness without the bite.

After months of hard work, we have finally nailed a New England-Style IPA we find worthy of sharing. We’re excited to finally release our year-round, draft-only, Colorado-exclusive Hazy IPA.

THE BEER
This take on a New England-Style IPA is a juicy mix of citrus aroma and nuanced fruit characteristics. The flavor opens towards tangerine and lime zest with notes of tropical papaya and mango and finishes with a hint of ripe strawberries. At almost 6 pounds per barrel of hops, this Hazy IPA is a hop bomb that delivers the bitterness without the bite.

BEHIND THE BREW
At Great Divide, we’ve held a vision for constant change and innovation for the past 23 years. We continue to strive to push the envelope and ourselves. Throughout the years, we’ve had a great run of big, piney, citrusy IPA’s. Our Titan IPA and Hercules Double IPA are Great Divide classics that never fail to deliver. But recently, we’ve wanted to try something new and give our fans a fresh IPA to salivate over.

Creating our own Hazy IPA has been a long time coming. When this style first picked up attention, our brewers were already working hard to create the perfect Hazy IPA. Knowing that this style can be a hard one to nail, we didn’t want to jump the gun and release something that wasn’t the best of the best. S0 after months of testing recipes, developing pilot beers and rigorous rounds of QA, we finally nailed a Hazy IPA worthy of leaving our brewery walls. Because our brewers are constantly driven by the mission to release only the best beer possible, we took our time. And it paid off.

WHERE CAN I DRINK IT?
You may have heard this style of beer is unstable and shouldn’t be distributed. This may be partially true. Hazy IPA’s do have a shorter shelf-life than most beers, making it harder to distribute. But we are lucky to have the city of Denver at our fingertips. Our Hazy IPA is kegged and shipped to our Colorado wholesaler within hours. Meaning, we are able to get this beer out the door quickly and into drinkers hands (and mouths) in a matter of hours. We wouldn’t distribute this beer to our home market if we didn’t think it could handle it. If you find our Hazy IPA on tap, you can be certain that it will be fresh as it will never travel too far. You can drink it directly from the source in our tap rooms, or find it on draft at select restaurants and bars in the Denver area.

In 2018 we decided to put our Hazy IPA in cans as a limited release! Due to its very limited shelf life, these cans will only be available at select accounts in the Denver Metro area. So, if you find some on the shelves at your liquor store, snag a 6-pack of this limited release and drink it fresh!

Come visit us at our Tap Room and Brewery or Barrel Bar to get a taste of this juicy, fruity, hoppy, Hazy IPA.

Save time—automatically create your print menu with one click.

or Don't show this message again

Get the most out of BeerMenus